I’ve had a chance to play in some really nice places this week. I had a very relaxed lunch time performance for Ultimo TAFE on Tuesday, It was very enjoyable playing for them and a good chance to try out some new songs…and very old ones. On Friday night I headed up to Dee Why and played a late night set at the Flame Bar. It was quite busy and the duo that played before me were very upbeat with percussion and quite a big rig. They were great guys and were extremely good. It was fun to put a bit more energy into my songs to help them blend in with the feel of the night.
Last night Steve and I played some songs for my friend at her gala theatre night. She has directed a play for Griffin Theatre at Stables in Darlinghurst. It is magnificent, with fantastic performances and great design. The script is so well written and is about social observation of greed and modern morals. Aptly set in the world of Sydney real estate. It is on for 3 weeks and has just opened so if you get a chance to check out some theatre I totally recommend it. It’s called Handling Claire.
For the theatre gala night, Steve took the melodies on the violin and it worked so nicely. It meant we could play through our songs and hear them in a new way, as well as keep the music very clear with the warmth of the violin being the voice.
Today Steve and I are playing at The Gladestone Hotel in Dulwich Hill from 3 til 6. Be great to see you if you can make it. On Wednesday night we are playing at the Vanguard in Newtown as part of a Nick Drake night. I’ll post properly about that one tonight. I hope you are enjoying your day. 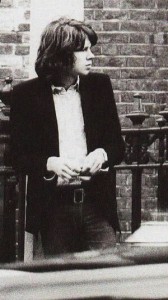