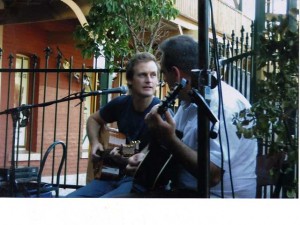 Phil Bebb and I at The Kalamunda Hotel

Kalamunda was awesome. I had my first gig at The Kalamunda Hotel, which thanks to my good friend Phil Bebb, who brought an awesome P.A. not to mention his beautiful family, as well as my family and friends turning up and some great weather, plus a very friendly management team who made us feel very welcome, it was a fantastic afternoon! It was also great that Phil joined me on guitar for a number of songs as we used to play together in a band in highschool. My mate who played drums for our band and who I haven’t seen for over 15 years came along too, so that was awesome to see him and catch up on all his news.

On the music front I managed to spend the time revisiting a number of songs which have been on the back burner for quite a long time and I’m looking forward to recording and posting them soon.

Whilst I was there The Kalamunda Hotel were very happy to announce that Mental as Anything were going to be playing there on the 2nd of March. They asked if I would come to support them, which is great news, as they were icons of my Kalamunda years and I am very much looking forward to meeting them and catching up with my friends again.

My parents spoilt me as always with roast dinners and irish beer, and letting me annoy their neighbours with loud strumming in the back room so thanks Ma and Pa xx